Although the news pretty much never covers this subject at all, it covers its symptoms constantly. Much of the whole world is set up as a free-range debt-slave plantation; it's basically the biggest scam going. Since this is a big, complex subject, you'll have to watch the hour and forty five minute video presentation at the end of this post (made in 2010) to get up-to-speed on the debt-slave plantation scam. The guy who made the video, Damon Vrabel, was vocal about exposing this whole scam several years ago. But after spending a few years at it, he gave up due to seeing no hope for snapping the populace out of its left vs. right stupor. So he disappeared from the web to forgive it all on his own. I came to the same conclusion as Damon Vrabel after being interested in this subject for a number of years. I wrote a book about the subject in 2008, Dissolving Dollars.

The basic formula of the free-range debt-slave system is that all money in the system is issued as debt plus interest. To pay the interest on the debt requires evermore debt. If all debt in the system were paid off one day, all money would cease to exist since it was borrowed into existence. Since governments are the only entities that never pay off debt and instead only grow it, national debts represent the base money supply of the system. This all sets up a pyramid scheme where real wealth created by the many on the bottom is siphoned off by those higher in the pyramid who are able to issue debt and collect interest on it. Money doesn't have to exist as debt but it makes for a great scam when it is.

In the U.S., the establishment Democrat and Republican parties both exist to keep the debt-slave plantation running. And each party has its own sleight of hand to keep the slaves focused on symptoms of the scam rather than the scam itself. The left portrays things like corporations, big business, and profit as the problem while the right portrays things like socialism and big government as the problem. That sleight of hand keeps the left and right fighting each other in a zombie stupor over symptoms of the scam instead of joining teams to tackle the scam itself. And so it is all a back and forth treating symptoms to keep the cause safely hidden. In the end, the battle between left and right is simply a battle between who pays more and who pays less to keep the scam going and sustainable; socialism (big government) works just as well as capitalism (big business) to keep the scam going. As long as at least half the slaves are sufficiently content at any given time, the system is safe.

Take a look at this pyramid. This summarizes the whole system. See how the incessant fighting between the left and the right just serves variations of the same one scam? 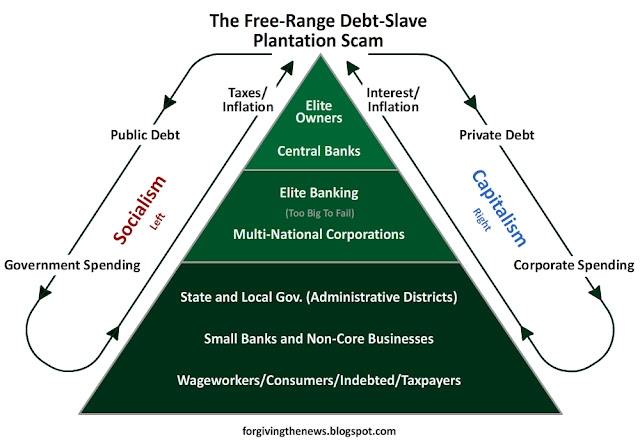 Although true forgiveness isn't an intellectual thing, it is often helpful to be knowledgeable about what you are forgiving. Without knowledge, you're likely to project guilt onto symptoms rather than causes. And so you'll try to fix the symptoms instead of the causes. No amount of forgiving solves anything if the solution requires letting go of the guilt that keeps you ignorant of the cause. The ultimate cause is mind of course. And since the world is a derivative of mind the problems of the world born of being unaware of worldly causes just represent the denial of accepting mind as the ultimate cause. When you know the cause of a problem you know the solution and so it is no longer a problem to be solved just resolved.

So, the whole point of urging everyone to sit down and really soak in the content of the video at the end of this post is so you can stop projecting guilt on symptoms and instead get to causes. Because it is easier to forgive a cause than chasing countless symptoms as separate things to forgive. Once you are cognizant enough to see the worldly cause, you can more easily bring it back to the ultimate cause: mind.

You should find it interesting how often Trump is mentioned in this 2010 video presentation. Even though Trump as a personality is the perfect face upon which to project the guilt of the system, his rhetoric is often a challenge to key aspects of the debt-slave plantation. The Democrats, Republican establishment (Neocons), and establishment media loath Trump. For as long as Trump lasts as president, how critically he is portrayed will be a barometer measuring how much he is caving in to the elite power structure (deep state) or instead threatening to disrupt it. The highest point in the media for Trump so far was when he bombed Syria, which pleased the power elite. And interestingly, the whole attempt to vilify Trump due to his friendliness with Russia is perfectly transparent when you understand the system. At the 1:03:00 mark of this presentation, it talks about how the different countries fit into the whole debt scam and how Russia is the big outlier that has tried to remain separate from the global scam. Also worth noting is that at the 1:21:00 mark, Bitcoin would be mentioned if the presentation were made today. Bitcoin and crypto-currencies are a non-political attempt at a solution for destroying the debt-slave plantation. And when the video mentions Hamilton versus Jefferson, especially at around the 1:30:00 mark, think about the recent weird popularity of the musical Hamilton contrasted with the recent constant vilification of Jefferson. It's embarrassing to see how manipulated people are by their left/right identifications into being puppets of the system. Left vs. right is a trick, the real option is between bigger more centralized control or smaller more decentralized freedom. The more centralized the control, the more force and the easier it is to maintain the debt-slave plantation scam.

Lots of news becomes a lot easier to forgive if you have the background explained in this video under your belt. So, stuff I cover in the future will refer back to this. To me, I forgive all this fairly easily by realizing that the system as a whole exploits people's egos. Even most people high in the pyramid don't really understand the structure. The structure is relatively automatic due to how well it caters to and exploits people's egos. So I see no difference between the lowly dupes that blindly sustain the system and those who run the system. Because the same ego dynamic is working on all levels. Yes, the system could change if people woke up but I'm personally not going to bang my head against the wall trying to wake people up. As long as force is acceptable to people in society, especially in the form of government, some people are going to exploit that force to set up scams.


And finally, I want to throw in the caveat that even with this knowledge it will still be easy to come to faulty conclusions. For instance, a lot of people who learn about this stuff in turn project a lot of guilt on the Federal Reserve. But as far as central banks go, the Federal Reserve is relatively tame. Getting rid of the Federal Reserve without changing the system as a whole wouldn't be better and could easily be much worse. There are even theories that there are good guys in key places like the Federal Reserve and governments who are trying to sneak in a new, better system. Look up "Road to Roota theory" as an example of that. So, don't get suckered projecting guilt. The contemporary monetary system exploits and caters to people's egos, that's why it is what it is, no need to project guilt.