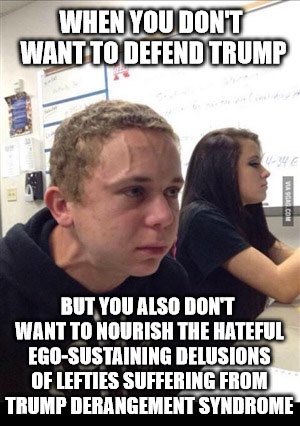 Trump Derangement Syndrome (TDS) has become a widespread mental health issue. TDS is the kind of thing you only notice if you aren't suffering from the syndrome yourself. What prompted me to write this post was some TDS displayed in the Course in Miracles community. I must speak up when I see people mixing ACIM with alienating about 63 million Americans and potentially feeding unforgiveness in about 67 million.
Note that as of Jan 2021, I decided it would be best to take down this post. The Trump Derangement Syndrome crowd gained control of the federal government and is acting like it is out for blood. I will keep up the running list of hysterias though.

Running list of notable Trump Derangement Syndrome hysterias since posting this December of 2017: