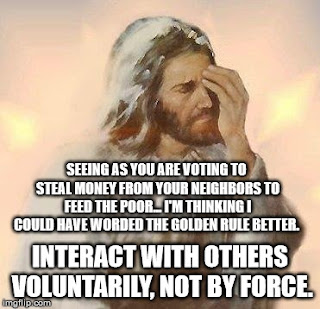 November 6, 2018 is "government force rearrangement day" (election day) on the USSA plantation (earth is currently divided into 195 plantations). And so I decided to write a post about forgiving democratic slavery.

Despite the constant stream of guilt trips trying to bully me to vote, including from "spiritual teachers claiming to be listening to the Holy Spirit," I don't vote. Not because "it's pointless," or "rigged," or because "I don't care," but because voting is democratic slavery; it's a culturally conditioned ruse. Voting is an attempt at forcefully enslaving my neighbor to my own preferences, or often more accurately the preferences of my preferred masters (of which I personally prefer none). No one has that right, even if people imagine they do thanks to conditioning. The majority cannot give consent on behalf of an individual; doing so is a recipe for atrocity. We should strive for all human interaction to be voluntary, not forced. Until humans are ready to accept that simple rule (which most already do most of the time in day-to-day life but not when it comes to government/authority), they'll continue just fighting over force instead of ending it.

Democracy preserves status-quo government force; it's a pendulum that evens out so that the force a given individual wants and supports also comes with force he or she doesn't want. The acceptable midpoint of the pendulum swing varies by society and over time. Too much disequilibrium leads to splitting or forceful preservation of unification. Then the go-nowhere game of force just repeats.

I, of course, have no problem with government or anyone else acting as a defensive force against initiators of force. But since government's defensive force is predicated on illegitimate offensive force, I still don't approve of it. If you are forced to pay for cops or military, then their existence depends on initiation of force. On top of that, being forced to pay for something eliminates the feedback of voluntary transactions. Without people voluntarily paying for a good or service, feedback on pricing and quality disappears. So, for instance, when people are forced to pay for cops, people never really know what cops would be like if people paid for them voluntarily. We'd likely find that most people would only be willing to pay for cops under certain conditions and only if they actually prevented the initiation of force and not just pretend to try to track down people after the fact. All that kind of stuff is part of what is known as "the economic (or socialist) calculation problem." But very few people have much of a clue about economics, including people college educated in economics, since real economics debunks the force-dependent progressive agendas of the education system. But a mind able to grasp economics is alone enough to see through democratic slavery, even without factoring in the immorality and faulty ethics of government force.

Overall, voting reflects a random sampling of the preferences of statists. A random sampling of statists (supporters of government force) is not going to correspond with what I want. I want everyone to have what they want as long as what they want doesn't require initiating force and is thus voluntary. Therefore, what I want cannot be achieved through voting (at least not normal voting). Blue force, red force, green force, pink force...different denominations of the church of coercive monopoly have no appeal when you only support no initiation of force.

Just because most people don't have the creativity to imagine a world without attempted monopolies on the initiation of force in society (governments), that doesn't slow me down. I don't have to wait for other people's permission to be free and neither do you if you want. I personally arrange my life around being as free as possible... subject to as little government force as possible... and as free from supporting government force as possible. In that sense, I'm a kind of John Galt (for those who know who is John Galt). I'm on strike against the force perpetuators and perpetrators, making me poison for both the left and right lol. If it isn't voluntary, I won't support it. And that's one way I forgive that which I don't support. I don't get involved.

All forgiveness is really self forgiveness; the only thing to forgive is one's own projections of one's own guilt. Supporting force would make me feel consciously guilty, let alone unconsciously. So, I skip that whole landmine of guilt by not participating in that which is doomed to always fail: force.

The unconscious belief that we initiated force on God (oneness) to make our own universe, and in turn destroyed heaven (oneness), is the foundation of guilt. When you advocate government force, you inevitably tap into that unconscious guilt. And you won't forgive yourself for seemingly using force on God until you stop doubling down on force. That's why politics is such a mess of incessant guilt projection. The people who participate and believe in politics are doubling down on force instead of forgiving it. Government is an attempt at a man-made god of force: an idiot god.

Life in this dualistic universe is messy. You can't even breathe or take a walk without accidentally murdering things. Yet, on the level of human interaction we can realistically strive for a higher ideal than force. We are all seemingly here in this universe because we wanted to split off from our whole self and be different. The advantage to being different is that it allows one to project one's own unconscious guilt onto seemingly different others. Sometimes we see others as having something we are missing and want while other times we see others as having something we have but don't want and thus want to pawn off on another. Either way, when we fail to look at another human as a mirror and instead see another human as external, we get caught up in the ego trap of trying to change others (the world) instead of ourselves. That's the appeal of politics and the appeal of control of the force of government.

I'm not a fan of one size fits 100 people, let alone one size fits 320 million people. In this universe of special relationships, you want decentralization not fake oneness. Fake oneness is achieved by force and never lasts. Government is a tool for fake oneness and so countries are examples of fake oneness. Conversely, voluntary interaction is the closest thing to oneness in human society even though it is decentralized. For instance, even though a lot of people ignorantly project a lot of guilt on capitalism, it is actually a beautiful thing when two or more people come together, overcoming the first law of chaos, in a win-win voluntary transaction that satisfies the subjective preferences of each party. No martyrdom or force required, just win-win, like oneness. That doesn't mean that people don't still harbor guilt in voluntary transactions. For instance, you may agree to pay five dollars for something but you would have rather paid two. You paid five because you voluntarily complied with the wishes of another to close the deal and come together in a net win-win. It's still a far cry from heaven, but a reflection of unification nonetheless. Contrast that with passing a government law that steals money from people by the force of taxation to give it to other people and you start to see the difference between voluntary and forced interaction.

Force is a hotbed for projection and win-lose scenarios. And force inevitably leads to more force. For instance, the force that makes the welfare state and public property possible also makes the force of immigration control necessary. No need for immigration control if there is no public property to squat on uninvited, no free taxpayer funded stuff to attract moochers, and no government force to fight over for control (voting). The political right would love immigrants if they tended to vote right. Instead, they mostly vote left. Hence, the left loves leftist immigrants since they can help in their lust for controlling the coercive monopoly called government. Petty self interest in the form of selective compassion.

Just think, what if they had a war and no one showed up? There wouldn't be a war. Similarly, what if they had an election and no one showed up? That would mean people chose voluntary interaction instead of government force: freedom instead of masters. I don't see that happening anytime soon; too many forgiveness lessons yet to go collectively. You'd first likely see people become more decentralized and then minarchistic (minimal government) before they gave up on government force altogether. And quite frankly, I'd be perfectly satisfied with a society able to maintain minarchism. Nonetheless, going beyond government/force is bound to happen somewhere eventually, because it really isn't that radical...especially with the help of current technology. It would just require some societal reprogramming.

Anyway, I choose forgiveness and innocence. I can't stop people from supporting democratic slavery other than voluntarily. And since I choose forgiveness, people can sling all the guilt they want at me for refusing to participate in democratic slavery, but I'm not going to budge. Guilt trips only work on those who don't forgive. And people can hurl all the derogatory terms (like Nazi or Commie) they want on people who oppose their own preferred types of government force in favor of other kinds of force, but I'm still going to forgive and see the ultimate innocence in every miseducated supporter of force. And I'm going to continue to preserve my own innocence on the conscious level, let alone unconscious, by keeping my hands as clean of government force as I can.

If you want to better understand why I call voting democratic slavery, check this out: https://youtu.be/vb8Rj5xkDPk