What I Learned from Four Years of Forgiving the News 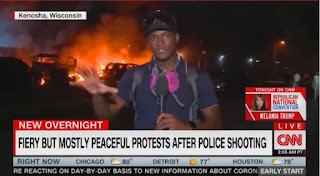 As a voluntaryist, I don’t support the left or the right, because I don't support statists. We should strive for all human interaction to be voluntary not forced; that precludes the whole archaic concept of government. The only thing I like about the left and right is that they oppose each other. In other words, they are somewhat tolerable as long as neither has enough power (force) to do much. However, an important thing I clearly learned from the last four years of forgiving the news is that even when the left lacks elected governmental power, it still holds most other types of power.

Over the last four years, through the left’s desperation to defeat Trump, the mask of pretend neutrality has completely fallen. The corporate press, the big tech companies, the unelected permanent government, academia, entertainment, establishment republicans (Lincoln Project), spiritual gurus, and so on are all dominated by the political left. The result of all that power is a relentless propaganda machine that serves the goals of the left. The right has its own propaganda machines but they are miniscule in scope by comparison. The right’s propaganda machines are more decentralized and independent rather than institutional. Consequently, due to the left's widespread institutional power, the political right is always the underdog these days, even when it holds elected governmental power.

As a result, although the left may find this hard to accept, the right, on average, tends to be a bit better informed due to the fact that, due to the left's cultural dominance, those on the right can't help but get both sides of most propaganda. For that reason,"on average" the worldview of those on the left tends to be more one-sided. And I emphasize "on average" since there are lots of individuals who don't fit the average.

Propaganda machines are not truth; they can be factual but they always bend truth to their favor. People choose their preferred propaganda machines based on what they want to hear. And in the realm of politics, what people most often want to hear are stories explaining why their own political team is innocent while the other team is guilty.

Through the last four years of forgiving the news, I’ve consumed less and less news. I’m down to almost zero news now. Forgiving means letting go of guilt. The attraction of news is guilt. And to consume news without the pursuit of guilt (projection) is rather pointless. At its core, news is mind programming designed to satisfy the appetite for guilt projection; it’s not about truth but guilt. So, in that sense, even from a practical perspective, it’s better to be uninformed (unprogrammed) than misinformed (programmed). News is okay if you use it to forgive, but if you do actually forgive it you'll lose interest. On the other hand, if you don't use news to forgive (like most people), I can hardly think of anything more detrimental to the mind and beneficial to the ego than consuming the news (propaganda).

Seeing as I’m down to almost zero news, I really don’t have much to say about forgiving the news anymore other than the generalities that I’ve already covered. I’ve even lost interest in the people sincerely trying to sort through the propaganda that passes as news, like Tim Pool.

Anyway, rather than say anything more, here is a series of quotes from anarchist (without rulers not without rules) writer and professional smart-ass Michael Malice that I’ve collected over the past few years. These quotes get to the core of the guilt-dealing, mind-control business called the news:

“The corporate press is the enemy of the people.”

“The corporate press is factual but not truthful.”

“The establishment's bloodlust for war—in which I include the corporate press—cannot be overstated.”

“Referring to the corporate press as mainstream normalizes their malfeasance and depravity.”

“The battle is won when the average person regards a corporate journalist exactly as they do a tobacco executive.”

“The fact that there are pathways that distribute news and information outside the Cathedral's control causes them existential dread in direct proportion to their recognition that these are existential threats.”

“Extremist: A person who refuses to submit to the edicts of the Cathedral.”

“As humorless, self-righteous, insufferable and mediocre the corporate journalists are, they still fare better in all those metrics than university professors.”

“The evangelical left is so thoroughly convinced of their right and duty to rule that they leave no psychological space to address being defied, let alone being repudiated.”

“They want you dead but will settle for your submission.”

“Those who need leaders are not qualified to choose them.”

“Whenever you hear them cite ‘experts’ they are invoking how they trained you to listen to your teachers as a kid.”

“To be blue-pilled is to perceive every screen as a window.”

“To be red-pilled is to believe that what is presented as truth by the corporate press is in fact a carefully constructed narrative designed to keep some very unpleasant people in power.”

"Blue pill: 'If that were true, I think I would have heard about it.'"